As I write I am wondering if anyone has done a formal comparison between a valve radio that receives an analogue signal and a portable digital radio. Has anyone been game to do it? After getting over a recent server failure that brought Vintage Radio to its knees I had a think about the digital world we live in and the benefits (and downfalls!) that come with it. So here is a comparison between a low-cost digital radio purchased from Myers and a low cost analogue valve radio which may well have come from the same place, although to those living in NSW it was known as Farmers back in 1947!

The specimens chosen are as follows:-

This will make the patriotic heart beat faster, if only for a few seconds. The Radiolette was designed and made in Australia. Everything from the valves to the screws that hold the chassis in place were made at the once-mighty AWA Radio Electric Works in Ashfield, NSW. The Pure was designed in Great Britain and made in China, which is were all but the most upper-spec electronic products are made these days and no country is immune from the push to have everything made in China's huge but cheap to operate factories.

The Radiolette has a brown Bakelite cabinet and whilst costs were lowered by skimping on thickness and size, the cabinet serves its intended purpose and attention to detail is still excellent, as would be expected from a locally produced radio at the time. The Pure's cabinet is of black thermoplastic and despite the low cost the fit and finish are also good. 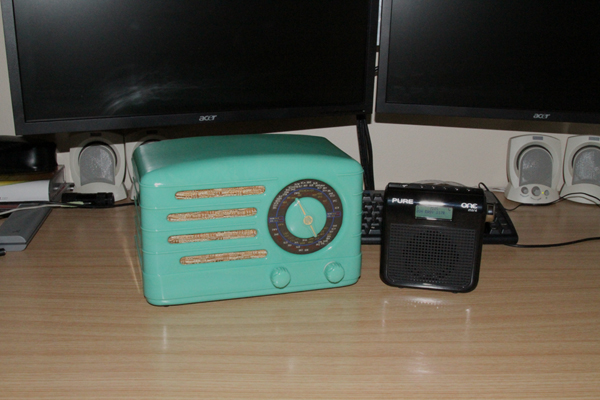 In 1947 we were spending pounds instead of dollars but we'll convert everything and note the burden on the average weekly wage to make life easy. The Radiolette would have been bought for $32.75 (£16/7/6) when the weekly wage for average workers was $14.00 (£7/-/-). The Pure cost $99.00 (£49/5/-). The weekly wage in Australia at the moment is around $700 (£350/-/-). As you can see, buying a radio in 1947 was as significant as buying something like a plasma television today - a decision not taken lightly for the appliance must work perfectly for many years. Because of the relative low cost of a budget digital radio, if it dies it goes in the bin and another is purchased next pay.

As a rule, radios in the valve era didn't contain anywhere near the number of features that are available today. When you unpacked your new AWA Radiolette for the first time, sat it on the kitchen table and then risked life and limb to get the bayonet adaptor plug, that most of them were fitted with, in the nearest light socket, the dial lamp would come on, the valves would heat up and then you needed to tune the receiver to your local station. When I unpacked the Pure I plugged it into the now-standard three pin socket and its firmware booted up, scanned for all available local stations and then by some quirk of luck it selected my station of choice (2CH in Sydney) and started pumping out the music. Most of Sydney's surviving AM broadcasters and many of the FM broadcasters run digital simulcasts and I found no less than 40 stations when jogging through the station selector. 2CH, 2GB, 2WS, 2UE, 2DAY, 2MMM, Nova 969, Triple J, 2BL and 2KY are amongst the dozens available. Most of the other stations are either run by the ABC or SBS or are second stations offered by those listed above and generally offer a specialised genre of music - rock and roll, country, jazz, etc. 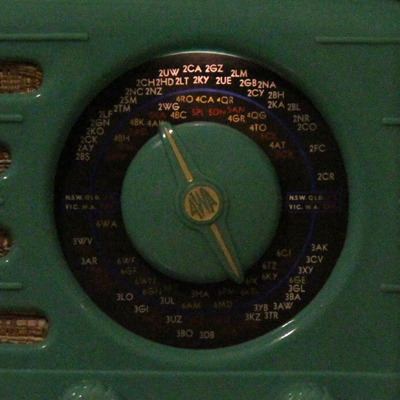 For its comparative austerity, the Radiolette has a feature that no modern radio could ever hope to achieve - the ability to suck in long distance stations. It isn't such an important feature these days as most places are served by huge networks of stations and local translator services. Back in 1947 there were less than 100 stations and most remote locations had nothing. Your radio and its very long aerial wire had to do the hard work that the networks now pay for. At night, when there is no sunlight to interfere with signals, you can hook up an aerial wire to the Radiolette and it'll pick up 3MP, 4BC, 2TM and 2XL from here in Sydney. Fading is minimal if the aerial is big enough and your radio is correctly tuned.

Both radios show all available stations and the station being listened to on their dials. The Radiolette has the familiar round dial glass with the aero pointer and it simply points at the station you are tuned to. Very simple, but also very reliable. The Pure has the more modern LCD screen and displays information such as volume, the station callsign, the correct time and the signal quality. The Radiolette will only receive AM broadcasts whilst the Pure will receive digital and FM - why bother with FM when you can listen to the digital simulcast though? One day both AM and FM analogue broadcasts will be superseded by digital.

When a valve pops a valve radio will fall silent. This isn't really a problem these days as most people won't be in a position to routinely listen to one. Most of the Nation's surviving valve radios are now in the hands of collectors and museums. For the same reason, spare valves are still plentiful enough to allow collectors to restore most receivers. Although one thing to remember is that valve radios can be repaired. Modern solid state receivers cannot. If one of the Pure's on-board integrated circuits calls it a day the whole radio is stuffed and it has to go in the bin.

The Pure comes with the ability to be battery powered however you can't simply slot in four AA cells and be on your way. You have to purchase Pure's rechargeable battery pack. Pure claims that this helps to reduce landfill because dry cells cannot be used however what they forget to tell you is that you can get AA cells that recharge and when they fail they take up less landfill than their battery packs. Pure's website is also incomplete at the time of writing this article.

Most people will never realise it but there is an eight second delay between an analogue broadcast and its digital simulcast. This also applies to television transmissions and some people who choose to watch the Nine Network's digital cricket broadcasts but listen to the commentary on 2BL though because 99% of these people are listening in on 2BL's analogue transmission on 702kHz they are listening to the Poms win the match eight seconds before they get to see it.

This is not the fault of Channel 9 or 2BL - it's just how digital broadcasts work. It takes time to process digital signals and convert them into the analogue sounds that the human ear can understand and this is even before accounting for the delay of a few seconds on all live broadcasts so that accidental foul language can be 'bleeped' out.

How do they sound?

As a rule, AM radio broadcasts aren't known for adequate bandwidth. The channel spacing is just too tight. Valve radios do a far better job at reproducing bass and treble than any transistorised receiver though. The introduction of Stereo AM in 1986 did little to improve the situation because there was already a drift of the rock and roll demographic to the FM band by that stage and Stereo AM receivers cost an absolute fortune. Despite the Motorola CQUAM stereo decoder format being superior to other formats tried around the world the cost and benefits didn't make Stereo AM viable. Manufacturers eventually stopped making the equipment to receive it. The Radiolette has a mellow midrange tone which the 100mm speaker produces well. It's by no means perfect but it is sufficient to allow it to be listened to all day whether it be pop music or a call of the Ashes cricket test matches. Again, the Radiolette's valves help with sound quality.

The Pure's digital reception is crystal-clear with no hum, hiss or distortion. The tone has some treble but is mostly midrange like the Radiolette. This is more to do with the size of the speaker than the technical capability of digital radio though. The Pure's speaker is only 75mm. One thing I don't understand is why most digital radios only have one speaker. Surely listening in stereo would be much better. The Pure's external antenna has not been extended as the signal strength is sufficient to leave it stowed.

For sound quality, portability and convenience the Pure digital radio wins the race. It does look out of place in a vintage radio collection though and when one thinks about the romance and splendour of the golden days of radio and the ability to repair something that breaks or wears out you cannot beat the Radiolette. So for sound quality and choice of stations I would choose the Pure but for sentimental reasons I'd go for the Radiolette.