Vintage Radio - Back in time

Below are a couple of screenshots which show what Vintage Radio once looked like. Please click on the images shown to view the full-sized versions. 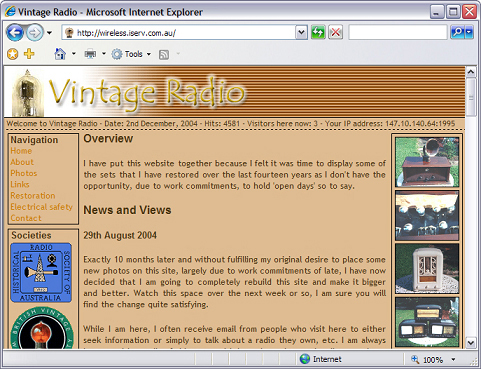 This was the first site. For a long time it sat and achieved very little as I had not had a lot of time on my hands to spread the word about it. For a first effort it wasn't too bad though. 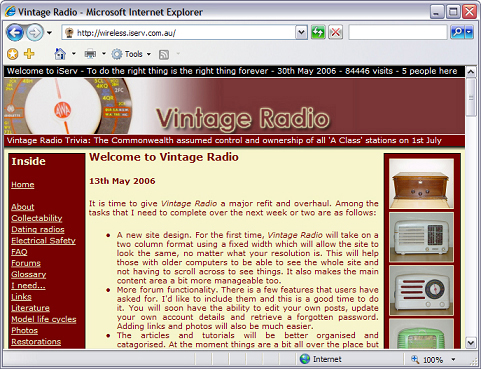 This second version of Vintage Radio really kicked things off. A brand new design and a ten-fold increase in content as well as submissions to search engines and hundreds of web directories, along with a plug in a paragraph from Silicon Chip Magazine's excellent Vintage Radio column made Vintage Radio a website coming close to national icon status. This version of the site also gave birth to the message boards which have been successful, though a little on the quiet side, which was to be expected when considering the niche hobby that the site deals with. 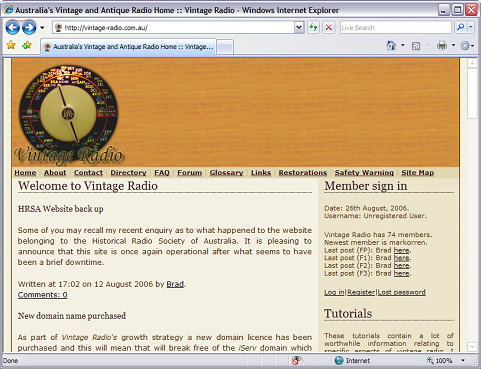 The third site introduced a services directory and many technical innovations including the first true dynamic metadata generator in the world - an SEO-related idea that is used by thousands of sites around the world now. 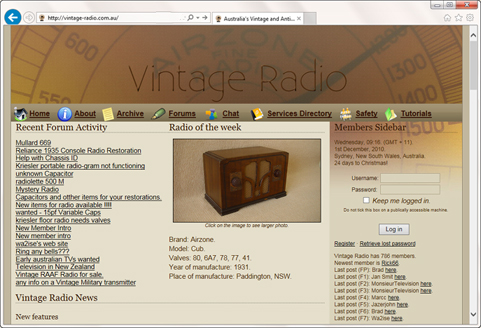 The existing design goes further by accounting for people who use large monitors by expanding the width of the site further to 1241 pixels, allowing still larger photos to be published. 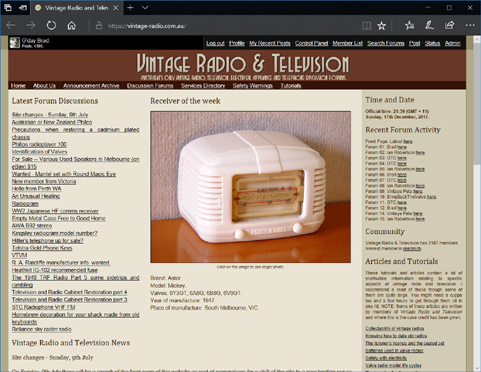 The fifth site introduced an even wider template still and started accomodating photos on the forums that were 900px wide during late 2017. Back in 2015 it was decided to offer secure connections to the site. A certificate was purchased and installed and this was followed by a brief transition period before forcing all visitors to the secure connection, which involved encrypting data travelling between the site and the visitor's web browser. During 2017 the site's content management system started showing its age, having been in place since 2005 reliability started to become a problem and it was eventually decided that it must be replaced with a new system if Vintage Radio was to have a future.

Whilst the site's design and layout was generally quite popular with members, the fact that so much has been added to the site over the years just made things a bit disorganised and software bugs became harder to spot and repair. When trawling through more than 200 files to find a tiny mistake - yeah time for a change! In December, 2017 the Hansard site software started to be phased out, only being kept for the forums themselves. The new system, called PlutoPup, has taken over for all the static content and will assume a steadily increasing role in 2018 as more functions get shifted over.

PlutoPup is based on Microsoft's .NET Framework and operates in a more efficient way, making it a lot faster than the previous Classic ASP-based system. One positive thing from the new system is that if a mistake is made in the code, the site simply will not work at all and will need correcting straight away. This means that there is far less chance of a bug lying in wait, only to show itself at a more inconvenient time.